When you think you will never be able to incorporate fitness into your busy and hectic day you can!  Have a look at your day; where can you make the time?  You may not be able to manage to do a full session at the gym but a 5km run or 20 minute HIIT workout maybe more realistic.  Aim to incorporate fitness in your routine 3 times a week, once it becomes habit you may find you want to commit to more days or longer sessions.

Ever heard of the One Mile Running Challenge?  No?  Let me explain how I came about this.  Now I’m a huge fan of running 5km. Main reason is generally it takes no more than 30 minutes so kind of fits into daily life; well mine at least. Plus being able to get 3 runs in a week ticks a box when it comes to my commitment to staying fit.

It got to the point where running a 5km became somewhat boring, I’d trained for 5k races. Having become fairly proficient at running a 5km I did what a lot of runners do when needing a new challenge I decided to start upping my distance. Also there seemed to be an abundance of longer distance races I could train for it I’d wanted to commit to training for such an event. So I pushed myself and my fitness by running 10km then when this became less of a challenge I went for 15km. Great you might think? To some extent probably but it also had a negative effect on my running and motivation.

Firstly all of a sudden I was having to commit up to 90 minutes per run. That was not always possible and the guilt inevitably kicked in if I didn’t or missed a gym session in order to accommodate a longer run.
I became a ‘shuffler’; apparently this happens a lot with runners that up their distances. I didn’t seem to have the spring in my running stride that I had developed when running 5km.
Overall my pace began to slow and my performance began to plateau. I might have been tired after a longer run I was never that exhausted that my heart felt like it was going to burst through my chest and my legs felt like jelly; it appeared that my body had adapted to this new distance.
Running further became somewhat boring plus I had to put more thought into route planning.
My motivation began to fade and the prospect of a run lost its appeal; even focusing on the post-run buzz was not much of a motivator anymore.

A new running challenge was required

Trawling through websites for inspiration I happened upon the idea of setting the goal of running one mile. There are many bloggers and running enthusiasts that advocated that this was a great distance to building up speed and quality of running. So I thought I would give it a go! With this new running goal I cut out the 10k & 15k runs dropped to one 5km a week and concentrated on running only a mile a couple of times a week as fast as I could! Ok so running longer distances is a challenge in itself testing endurance, stamina and sheer willpower to stick in there but running a mile can push you just as much but in different ways as I’ve found out since incorporating it into my training.

Taking the One Mile Running Challenge can help increase your motivation and improve #running speed! Click To Tweet

Benefits of the One Mile Running Challenge

This was a new challenge for me and so increased motivation, setting a personal best based on a mile meant I had to look at training slightly differently and had to look at incorporating speed work into my running schedule.

It only takes a fraction of the time so easy to fit into a training schedule. Also if you are unable to commit to a 5km or a trip to the gym this is a great option if you still want to squeeze some exercise into a busy day.

High quality; shorter length of time but higher effort levels required. Like a HIIT workout I’m able to put in maximum effort in a short amount if time.

Running a mile at full effort meant that I ran faster; running faster increases your metabolic rate which ultimate means more calories and fat are burned.

Helped with my overall fitness in other areas of my training and doesn’t have the negative impact on my body that a 10km might have.

Helps with overall quality of my running; am still able to maintain a good stride and running form.

Able to incorporate it into a visit to the gym easily; if it’s miserable outside I simply hope onto a treadmill and that’s my cardio sorted!

There are countless health benefits including improving bone density and muscle tone, strengthening your heart and respiratory system, helping to improve muscular endurance and helping to maintain your weight.

If you are struggling with the one mile challenge or wanting to build up speed then think about doing this using intervals. Try breaking down the mile into 8 sets of sprints or 4 sets of ¼ mile (approx. 400m) and aim to run at slightly less that your normal sprint speed. Doing this will ultimately increase your overall speed. Before actually the run a mile, warm up properly perhaps perform some light stretches, a fast paced sprint will help to get your heart rate up before the mile run. When training, try not to run on 2 consecutive days have a rest or cross-train. Cross-training is any exercise other than running such as cycling, walking, swimming; ideally something you enjoy doing. By doing this you will avoid muscle fatigue and lower the risk of injury.

My tips for taking the One Mile Running Challenge

Yesterday, I managed to smash my 8 minute barrier. That gave me a huge buzz! My next target will probably to make sure I can run this time consistently before aiming for sub 8 minutes.

I’d love to hear how you get on with this challenge or if you have set yourself other running challenges.

Brilliant if you are short on time as this HIIT style workout on lasts for 12 minutes.  Simple exercises that will give a full body workout.  3 rounds plus 1 minute rest at the end of each round.  There is no equipment needed; just you, suitable clothing and footwear and some form of timer.  Concentrate on working as hard as possible with maximum effort; those 12 minutes will fly believe me! 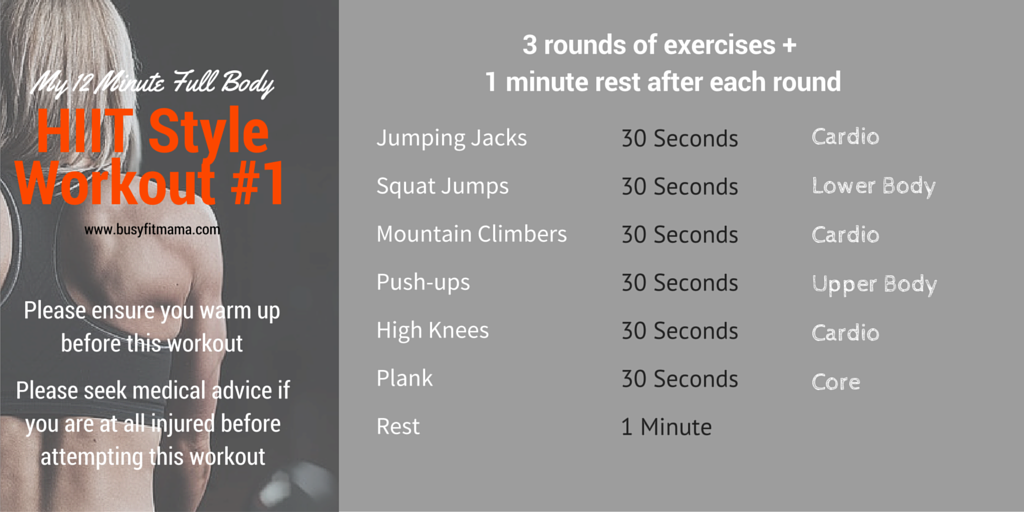 Remember when it comes to number of rep’s focus on quality and not quantity.  The fitter you get the more rep’s you will be able to perform.  Whenever I do HIIT I focus on doing each exercise well by using the correct technique.  It’s not a race!

Simple exercises that will give you a full body workout in 12 minutes, that's the beauty of HIIT! Click To Tweet