5 Things to love this September

Now September is here, there are so many things to love about the start of Autumn.  Yes summer is over but time to look forward to a new season.  From walks in the park to the perfect excuse to go out and buy new clothes, there’s plenty to look forward to as the nights draw in.

Here are the 5 things I’m especially loving this month.

I haven’t published a blog since last October!  Can you believe it? I suppose work, family and life just took over as these things tend to have a habit of doing and I got out of the habit of posting articles. The towel nearly got thrown in a few weeks ago and the plug pulled but I thought back to when I started my blog, what I loved about it and concluded that all I did was fall out of the habit like we all can do with a lot of things.  So here goes, I’m starting things off with my May Goals ……..

There all done!  It’s made me realise that I have let a lot of things in my personal life slide so this has been the perfect chance to reflect on things and pull my finger out when it comes to getting things done and making time to enjoy the things that I love doing!  Actually I’ve missed this.  Sitting down and taking the time to write this, being creative in my own way; so maybe I’ll not be throwing in the towel just yet!

I’ll admit it Autumn isn’t up there as one of my favourite times of the year.  Summer can seem more of a relaxed affair and with more daylight and sunshine my mood is generally in a happy place.  Then its BAAM! Back in to the routine of school and once past Halloween it’s that build up to Christmas.  Saying that I do like those first initial chilly mornings, the beauty of Autumn and having the kids back at school has it’s advantages, so ok maybe it’s not so bad?  For me when the nights start to draw in, the central heating goes on and my wardrobe switches to boots and sweaters it can be an excuse to start hibernating a little, switch to a stodgy diet and perhaps ease off on the running front.

Developing healthy habits will help to see you through the chillier weather, help to maintain a positive attitude and, fingers crossed, stave off potential weight gain.

Here are my 10 Healthy Habits for Autumn

Days are shorter, there's a chill in the air, adopt #healthy habits for Autumn to help boost your mood and fitness. Click To Tweet

Let’s see how many I can stick so!  What are your health habits for Autumn?

A little late but here are my June Goals!  Website problems; it’s still a learning curve for me.  I’ve kind of taken my foot off the gas in terms of this blog, maybe lost a little focus along the way but I still love my blog just feel that other things are taking priority.  Work, family; it’s easy to lose focus and get out of the habit of setting time aside to the things you love.

New monthly goals; Summer's here, get outdoors, socialise more but remember to include something that makes you happy Click To Tweet

Since making a conscious effort at the beginning of the year set myself monthly goals instead of a list of New Year Resolutions I find I’m actually getting more stuff done and also focusing on allowing a little more time for what I actually want to do.

So what are you wanting to achieve this month?  If you are in the habit of setting goals each month, remember to include something that you want to achieve as a personal goal.

New month, new monthly goals for me (sorry bit late posting this).  Spring is finally here!  It’s lighter in the mornings, days are getting longer and it’s not so hard dragging myself out of bed to go for a run first thing.  Spring makes me want to get out more. get more active, get more stuff done!

So far I’ve not done too badly at achieving my monthly goals.  Some harder than others but I’ve enjoyed the challenge and the feeling of having achieved something at the end of each month.

Like many people, I guess what I find hardest is finding time for myself and when I do making the most of that time; so that is why I have put this on my list for March.

What goals have you set your self this month?

Ok we’ve got through January, it’s noticeably lighter and spring is on it’s way!  January surprisingly didn’t drag as much for me as normal.  Ok so I still had no money, other friends were feeling the pinch so no socialising to get rid of the January blues.  Setting my own January Goals helped me to focus on things and be more pro-active about getting things done instead of mopping around the house.  I consciously made a plan and effort to achieve each of the goals that I set, 10 in total.  Some were easy, some were harder and took a while to complete.  It’s given me the motivation to carry on setting monthly goals and see what I’ve managed to achieved at the end of the year.

So here are my new monthly goals:

Looking back to the goals I set for January (read my blog post My January Goals) I’ve noticed that they generally focus on fitness, health, blogging, family and my messy house!  I suppose it’s what I’m all about but here’s to hoping the messy house will be a goal I achieve sooner rather than later!

Do you set goals each month?  What are your February Goals?

Welcome to 2017!  A brand spanking, new year!  No more resolutions, instead I’m going to concentrate on monthly goal setting.  It might give the opportunity to focus instead of just feeling overwhelmed by what needs doing or what I would like to achieve.  My January goals are a mixture of blogging, fitness and home life  So let’s just see how it goes!

What are your goals for January?

Happy New Year!  After a hectic 2016, I am excited at the prospect of starting afresh with 2017.  There are lots of things I would love to achieve and have lots of plans for 2017.  Looking back at 2016, I realise that most of my dreams remained just that.  Yes I did achieve a lot, but a lot of that was by chance or out of necessity.  This year instead of just dreaming about it I’m going to start setting some goals.  I might not achieve them all, they may change.  Who knows but at least by goal setting I will get some kind of focus as to what I would like to accomplish in 2017.

Goal setting also sounds a lot more positive than making resolutions; been there, done that!  Like many resolutions made on New Years Eve the majority have normally fallen by the wayside in the first couple of weeks of January.

Dreams will always remain dreams unless you set #goals, have a plan to turn them into reality! Click To Tweet

So I suppose I have to start somewhere, here’s what I would like to accomplish for 2017. These are my goals for this year.  I intend to break them down over the months so that they become achievable targets.  By the way the Dishwasher, for those that know me, is okay maybe not a dream but a bit of a sore point!

It can be a bit of a struggle coming up with fresh content for your blog.  Sometimes we are all in need of a little inspiration when coming up with Blog Post Ideas, I am no exception to this.  Ironically, when I’m not sat at my laptop the ideas come thick and fast.  Annoying isn’t it?  When this happens I tend to scribble down these flashes of blog genius on whatever piece of paper I have to hand (usually the back of an envelope) or add it as a note on my phone.

Finding fresh blog content can at times be a struggle, but if you love what you blog about half the battle is won Click To Tweet

So if you are hitting a brick wall of the blogging variety and need to get the creativity flowing then here are 25 Blog Post Ideas to help you out.

Hope you find some inspiration from these blog post ideas.  How do you find inspiration when the dreaded bloggers block shows it’s face?  If you love what you blog about half the battle is won and the ideas will start flowing, just be ready with pen and paper when they do!

Ok, so it’s been a while but life’s busy when you are 10!  Anywhoo, my daughter decided to post a Pizza Pinwheel recipe on her blog today.  My contribution apart from taking pics was of course the washing up.  Still it was nice to see her doing something she loved, being creative and away the ipad for a whole Saturday afternoon. 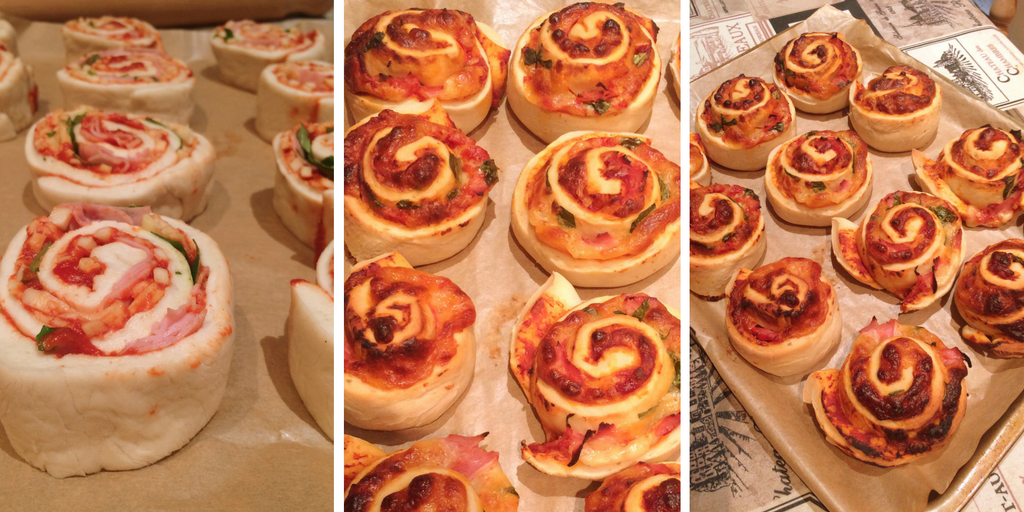