I’m a runner, regular gym goer and probably the fittest I have ever been despite having had 3 children and now being in my mid forties.  However, my fitness levels were never always like this as I lacked motivation and thought there were too many barriers stopping me from leading a healthy active lifestyle.  This all changed two years ago when I met up with my friend Pip in the park.

We were enjoying or rather rejoicing the fact it was the last week of the Summer Holidays.  It was one of those play dates when you let your kids run riot and don’t pay any attention to who they are terrorising and/or annoying while you sit putting the world to rights.  It’s like white noise after a while; don’t you just love parents who do that?  Believe me, filtering it out is a highly evolved coping mechanism of mine.

Sat in the sunshine, I was having the usual moan about life being manic, being overweight, feeling unfit, not having the time or money to do anything about it or more importantly not having the motivation.  Always the same cycle of events.  Hectic day at work, hectic post school run routine trying to feed the kids, help them with homework, prepare supper, sort the kids for the next day, reading of bedtime stories, getting the kids to bed ……..  Suddenly it would be about 9pm (ish) and there I am flopping in front of the TV, looking particularly glamorous in joggers and stained sweatshirt watching whatever happens to be on.  Might I add normally about this time one of my kids would be likely to yell, “Mum!  I haven’t done my Maths Homework and its due in tomorrow” or “Mum!!! I’ve ripped by school trousers!”  You get the picture? Sound familiar?

Anyway, back to conversation with my friend, Pip.  Instead of joining in with the usual moan (admit it we all love a Pity Party) she mentioned that she’d started running and now ran 5km 2 or 3 times a week.  She went on to say she was contemplating taking part in an organised 5km running event and was just looking for one to enter.  No! Surely not? Like me she claimed to be the busiest parent in the world!

That stopped me in my tracks.  Pip was in the same boat as me; 3 children, a husband that travelled a lot and generally was always home late ( if home at all), plus holding down a job herself. Interested in this revelation, I wanted to know more. The crux of it was that she’d been wanting to start running but had no one to run with and had the fear that if she started to run she’d last 30 seconds before collapsing in a heap. It was Pip’s mum who had mentioned that she knew someone who had used some iPhone app to get her into running, and it had worked. So inspired Pip searched for and downloaded Couch to 5K Runner APP onto her phone.  The App had claimed that it would take 8 weeks based on doing it 3 times a week 30 minutes each session. 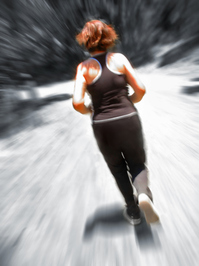 There was literally no stopping Pip after that. It did take eight weeks and yes she did feel like collapsing after only jogging for a minute but through interval training of walking & running by the end of it she was able to run for 5km! Mission accomplished!

I asked her why she thought this approach worked? Pip said it was the ‘little man’ (the app’s audio coach) that told her, through the headphones when to run & when to walk. No need to look at your watch or mobile for the time it was a case of her doing as she told. Also building up the distance run via intervals and being able to see what progress had been made as the days got ticked off also helped.

So I gave it a go. Downloaded the APP, dug out my ancient trainers (they had paint on them, classy eh), 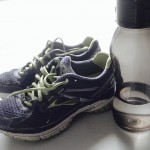 sorted a play list out which played when the little man wasn’t telling me what to do. Planned that I would start this challenge on a Saturday morning, got my running gear ready and for once didn’t consume copious amounts of vino the night before. No excuses, right? Right!  I remember my first session.  The warm-up was 5 minutes long which enabled me to walk to the park so no one driving could witness me puffing away.  After that it was relatively straight-forward.  Walking & running intervals then a 5 minute cool down.  Not too scary at all.  the man in my headphones was telling me to do anything unreasonable, perhaps I was in the zone?

So for the first couple of sessions I did feel really self-conscious, did feel I wasn’t cut out for this (funnily enough I used to be a very good runner up until my early 20s but I took that for granted and it wasn’t the’ in-vogue’ thing to do back then). But into the second week I felt I was able to run a bit further without feeling so out of puff. Also it occurred to me whilst running/walking (whatever the man was telling me to do through the headphones) I actually wasn’t the only one doing this. I did notice there were others in Heaton Park doing exactly the same so perhaps what I was doing was silly or mad.

8 weeks on, well 10 actually I was able to run 5km. I was really, and still am, proud of this achievement not only because I felt fitter but I’d actually finished something I’d set out today; overcoming obstacles that would normally be a factor for me failing.

I’ll be honest and say that I do struggle some weeks to get out and run a 5km but then again my whole fitness regime has evolved and now I do a lot of HIIT and weight training. Saying that, I did go for a 5km run last night. I’d been stuck in the house all day doing all the mundane chores we all have to do. It got too late to go to the gym and I needed some fresh air so I went for a run.   Not only did it blow the cobwebs away but it gave me time to clear my head. Playlist on loud, running a route I was familiar with so I didn’t think where to go next and a GPS APP tracking distance and time. Sorted!

Barriers to getting fit can be overcome with a little creative thinking and planning! Click To Tweet

Those weeks I spent building up to 5km gave me the motivation to strive to get fitter and adopt a healthier lifestyle.  It was a start.  I’m pleased I met up with Pip that day in the park, pleased the usual moan at life took place but most of all pleased that in the end it motivated me to do something about my fitness.  Thanks Pip! 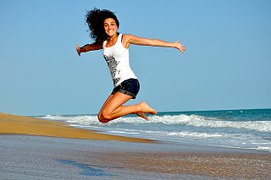 So have you recently got back into fitness?  What barriers did you have to overcome?  Are you struggling and simply can’t find the time or motivation?  I’d live to hear from you?

Busy working mum to 3 children. My passion is keeping fit and eating healthy. By adopting a healthy, active lifestyle I hope to be a positive role model to my children particularly my daughter. On the road to getting fit and staying fit I've had to overcome barriers such as body confidence issues and lack of time! I'm no expert nor claim to be but the steps I've taken have worked for me and continues to do so. Although my blog is a diary of my fitness I would love it to inspire other women to take up fitness and adopt a healthier, active lifestyle. Thank you!

View all posts by busyfitmama →

One thought on “Rebooting my Fitness; getting motivated and overcoming barriers”