Its been 6 weeks.  Wow.  Like everybody, my family have faced adjusting to a new norm; social distancing, living to a set of government guidelines to help limit the spread of Covid-19, shield the most vulnerable and protect the NHS so it …….  The way we went about our daily lives changed almost overnight.  Welcome to Lockdown Life!

Like many, I had been watching other countries go into lockdown and knew it was only a matter of time we would face the same restrictions experienced by our neighbours in Europe.  But I will be honest, I kind of thought it would be different for us, done differently.  It was when the  government announced that schools were closing this was a reality check for me.  I work in education and we were starting to talk about the possibility of schools closing a few weeks before it actually happened but I was not ready when it was finally announced.  For me that was the game changer, the ‘this is really serious now’ then came pubs, cafes, restaurants and Gyms closing.  but were not ready for when it actually happened.

So the last few weeks, like for most people, has been a learning curve for me and the rest of the family.  Adapting to a new way of doing things without much time for it all to settle in.

Faced with many challenges how the Taylor family adapted?

Rather ironically, I’ve always whinged on about employers failing to grasp the benefits of working from home and it was a matter of trust and empowerment.  So now most organisations have had no choice.  Both my husband and I are working from home.  He is running his business from the front room and I’ve got the kitchen.  He is able to get in the zone a bit better than me.  There have been the usual arguments sparked by inadequate broadband but so far so good I think.  I miss the team culture but I am catching up with the team via video call.  Mentoring and motivating a young team via video calls and emails has its challenges but as long as we share, get our tasks lists done and have a giggle then I think we are doing OK.  My husband is vlogging, having video client appointments and keeping in touch with his furloughed staff.

I’d say its working 80% of the time which I don’t think is bad, like many I just miss the face to face contact with others so I feel lucky that we have the option to work from home.  We’ve learnt to be disciplined about a start and finish time, making sure we pack everything away at the end of the day so our home becomes a home again!

– Doing our own thing, it’s OK just to do nothing!

When we initially went into Lockdown, whilst my husband was worrying about the future of his relatively young business, I saw it as an opportunity to do the things that we never normally have time to do or really don’t want to do.  Yes I have accomplished things I’ve generally put to one side but social media posts, stuff on the news about people doing amazing things, accomplishing amazing feats or mastering new skills have at times left me feeling rather inadequate.  So I’ve decided not to take social media too seriously and just enjoying the opportunity to slow down a little.  I’ve enjoyed reading the paper on a Sunday morning, exploring nearby parks at a slower pace, baking a bit more  and finishing off the odd DIY task. 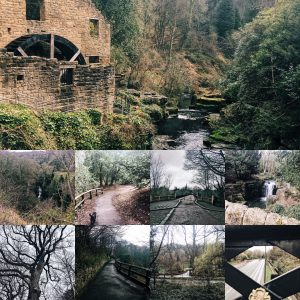 I did think at first I had it easy as my kids are in secondary school.  To an extent I think I still do but it has the been a challenge as when they are stuck with the work set, getting them up in the morning and getting them to self-manage a timetable.  I have been worried about the how inactive my kids have been.  I’ve learnt that they still need a routine but agreeing a bedtime (even for my 18 year old), letting them lie-in a little but insisting they are at their desks at a certain time have worked.  I’ve also bribed them to do fitness challenges, jobs round the house and that’s something that helps for a happier household!

The happiest my teenage boys have been during all of this was when the hair clippers arrived on Monday.  Oh the elation was off the scale.  Despite reminding them that we are in the middle of a pandemic, we were subjected to constant the whinges and moans .  So when they arrived, if it wasn’t for social distancing, I would have run-off with the delivery driver for the safe delivery of this precious cargo.  I on the other hand have partaken in a spot of panic buying concerning root-touch-up, it even featured in last weeks online shopping list.  With an inch of grey, I wasn’t going to take any chances.  So last Sunday I spent the best part of the afternoon attempting to shave, blend, layer, fade, trim my boys hair into a semi respectable haircut.  See for yourself!

OK so son number two’s cut was more mushroom than Vidal but eldest boys cut, not bad.  I on the other hand am building up the courage to do my roots, hopefully looking like a badger could be the next big thing. 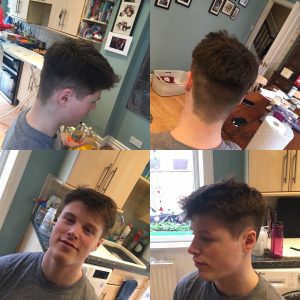 Thanks heavens for Zoom, House Part and Teams!  We’ve zoomed with families, house-partied with friends and kept our productivity going through Teams.  My!  What a learning curve this has been.  I like to consider myself pretty handy when it’s come to technology but I did struggle to start with.  For work and family it’s been OK but I’ve struggled when it comes to catching up with friends.  Things can get lost in translation and I do feel I shrink into the background if there’s a large group so that’s one for the road once we are allowed to mix again but for now I will just grin and bear it.  The kids are finding the whole affair rather toe-curling and prefer to slink away and catch up via Snap Chat or Xbox. I have particularly enjoyed observing the headsets colleagues have been using, who knew those Turtle Beach Gaming headphones would come in so handy eh?

I love the gym, it’s my therapy.  This hit me more that pubs and restaurants closing, ok that might seem weird for some to contemplate.  I’d worked so hard to get fit and lose weight.  So it was a godsend when my PT offered Zoom Boot Camps.  4 times a week, 30 minute sessions.  This has been a great way to keep motivated but also has kept me connected with some of the the other girls I know from the gym.  Added to this I’ve started to run again, nothing major just 5 km 2 or 3 times a week.  There’s also been loads of stuff on social media and my team at work have also been doing fitness challenges.  It’s been a case of trying anything and seeing what sticks! 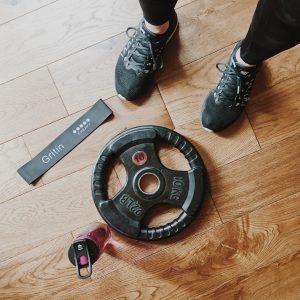 We’ve cooked together, worked out together, had a lot of fun.  My kids are at the stage where they will hide in their bedrooms for 90% of the time given the choice when when they have emerged we’ve for the most part had a hoot.  We have all suffered from Cabin Fever but focusing on the good times we’ve had has eclipsed all of that.

In September, fingers crossed, my eldest will be moving to Leeds for University, OK he will be back for when term ends but after that who knows?  He may decide not to move back to Newcastle or may want his own place.  He may decide to stay in Leeds, he may move back to Newcastle, he may want his own space.  So despite the arguments that have tended to erupt over the usual; messy rooms, Xbox, the WiFi, whose walking the dog I’m making the most of us all being together before my boy goes off to University. 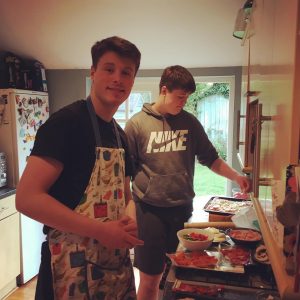 At the start, life was very chaotic to say the least.  6 weeks on, the scatter-gun approach to keeping busy and productive has settled down and we’ve found our own groove amidst it all.  I think that has been one of the important aspects of Lockdown; establishing a routine that suits all five members our families.

Being realistic about bedtimes for the kids, making sure they are doing their school work and helping with chores but also letting them kick back.   Ground rules have been set for working from home, the laptop goes away at 5 pm Friday not to be seen again until Monday morning, no answering work emails at the weekend.  The kids have learnt to knock before bursting in to the living room in case there’s a call or teams meeting going on; that took some doing!  Importantly, we celebrate the weekend but at the moment don’t have the Sunday night fear or pile of ironing that normally accompanies it. 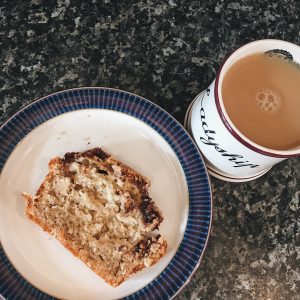 So we’ve coped, we’ve adapted.  Looking back it’s made me realise how pampered and sheltered our lives have become.  It’s also made me realise as a family how resourceful and resilient we are.  I’m also grateful that despite at times getting on each others nerves, we are a happy house.  Yes these times have been anxious and stressful but this time will pass

This week the PM is due to address the nation; laying out a road map as to how restrictions will gradually be lifted but I think we will still remain pretty much the same.

Will things ever be the same again?  Once lockdown is finally over, will we go back to our old lives.  I sincerely hope not, well not all of it anyway.

New month, new monthly goals for me (sorry bit late posting this).  Spring is finally here!  It’s lighter in the mornings, days are getting longer and it’s not so hard dragging myself out of bed to go for a run first thing.  Spring makes me want to get out more. get more active, get more stuff done!

So far I’ve not done too badly at achieving my monthly goals.  Some harder than others but I’ve enjoyed the challenge and the feeling of having achieved something at the end of each month.

Like many people, I guess what I find hardest is finding time for myself and when I do making the most of that time; so that is why I have put this on my list for March.

What goals have you set your self this month?

Why try a 30 day fitness challenge?

Have you ever tried doing a fitness challenge for 30 days?  This year I decided to make a new list of goals to achieve each month; one of these was to set a monthly fitness challenge.  I’ve become a little obsessed with monthly challenges recently, why?

So apply this to fitness and you’ve got a great fitness plan for the whole year!

Try a new fitness challenge each month, smaller goals are easier to achieve and you will see results quicker! Click To Tweet

Stuck for inspiration?  Then check out my 5 favourite fitness challenges that I have taken from Pinterest.

Finally you needn’t just have to limit it to a monthly fitness challenge; it can be absolutely anything!